The cat will mew and dog will have his day. 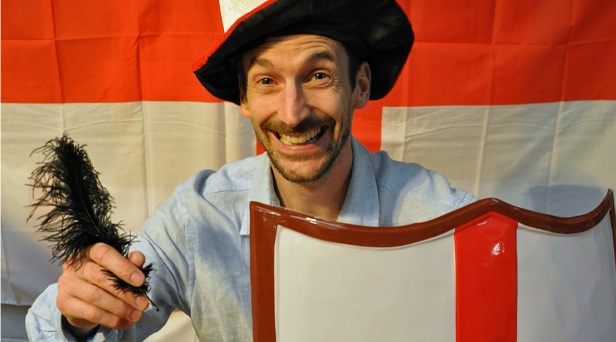 Peeks -the patriotic party people- have thrown their weight behind a campaign for the English to have an official “Shakespeare Night” to rival the Scottish Burns’ Night.

The company, based in Christchurch, Dorset, is backing the move to big-up the Bard and celebrate his life and works. Already the Queen has been asked for her support and has forwarded the suggestion to Maria Miller, the Culture Secretary.

Staff from the Falstaff Experience, a Tudor museum in Stratford-upon-Avon, came up with the idea.They want the night to be held on April 23, which as well as being St George’s Day was the birth day and death day of Shakespeare.

Peeks is keen to support the plan because it sells huge numbers of products for Burns’ Nights, but nothing relating to the famed English playwright. A Shakespeare Night would involve readings from his plays and sonnets, accompanied by minstrels singing, and food such as ox roasts and quince tarts.

Nick Peek said: “In recent years St George’s Day has really taken off to the point where it overtook St Patrick’s Day.

“So we know there is a hunger for celebrating Englishness, and a Shakespeare Day would be a natural extension of that.

“Everybody knows a Shakespeare quote, whether they realise it or not, and it seems odd that we don’t celebrate his life and his works despite his massive influence.

“There has been a huge surge in English patriotism in recent years, which culminated in a Royal Wedding and the Jubilee being massive events in this sceptred isle.

“And because of Shakespeare’s influence, the day would probably be celebrated around the globe.”