The Cross of Love – an uplifting story from London 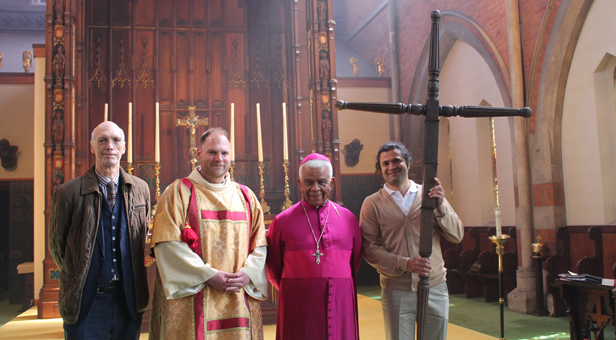 In 2011 drug vandals broke into the local Anglican Church of the Holy Innocents in Hammersmith. The thieves stole the vestibule table which had a small money box attached to the top for parishioners to pace their money for the church magazines. On breaking open the money box, they discovered it was empty. In their frustration, they decided to destroy the table and scattered the splintered remains across Ravenscourt Park. Canadian Parish Priest, Father David Matthews was inspired and proposed that a cross be created from the broken pieces of table. Congregation member Peter Julius commissioned the talented internationally renowned Persian painter and sculptor Ghareman Meleki. His name means ‘Angel’ or ‘Messenger of God’. He created a beautiful cross and named it ‘The Cross of Love.’ He said that building the cross had generated a lot of energy within him and  added, “It was a very satisfying experience for me as a local artist and sculptor, to create the cross and it was my way of expressing my love to the people around me.”

Last Sunday, 12 May, in a moving ceremony, visiting South African born Archbishop Walter Makhulu, previously Archbishop of Central Africa, blessed the cross after it was carried in to the church during a special confirmation service. He said it was “a splendid occasion.”

Father David Matthews of the Church of the Holy Innocents said, “The Cross of Love is beautiful; a simple but powerful work of art that reminds us out of brokenness, god is able to work good. The fragments of table, reformed as the cross, speak of the transforming power of love in all our lives.”
Category: DorsetMay 20, 2013