The Great Year – Understanding 2012 and Beyond 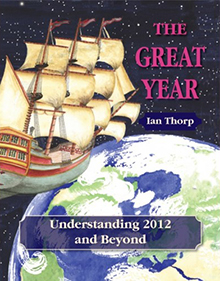 Using the device of a time-traveller named ‘The Captain’, whose vessel resembles an 18th century sailing ship rather like HMS Victory, the author seeks to reveal how our planet has been observed and understood by human beings since they first appeared on its surface. The captain explains to Jack, a child from Earth, our place in the universe, how the discovery of the ‘wandering stars’ (planets) affected our understanding of the universe, the causes of seasonal change and how some aspects of human behaviour have in the past and are now, affecting the Earth and will continue to affect its future.

The chapters include titles of ‘The Beautiful Planet,’ ‘Observers and Recorders,’ ‘The Sun, Night and Day,’ ‘The Seasons,’ ‘The Seven Wandering Stars,’ ‘The Days of the Week,’ ‘Difficulty Seeing The Stars,’ ‘The Constellations,’ besides the main universe theme embracing ‘The Significance of the Year 2012.’ Each chapter is short and beautifully illustrated which will catch and hold a child’s attention. A very interesting book for children who are interested in the cosmos and planets and how Earth is a part.

It is an ingenious and interesting way to present scientific knowledge to children and will probably catch the attention of more than a few adults as well.