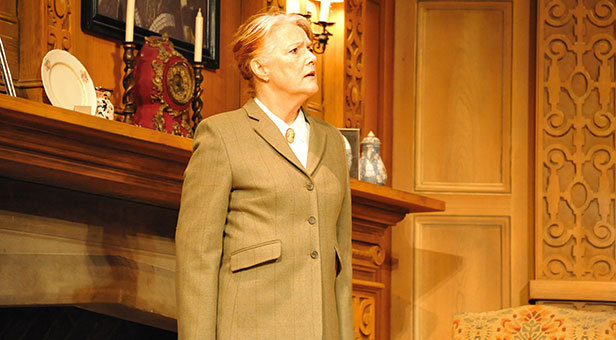 I’m now proud to be a member of a very exclusive club – even though there must be many hundreds and thousands of other members. I know ‘who did it’ in The Mousetrap.

It’s a perfect Agatha Christie mystery, a country guesthouse cut off by the snow with a murderer on the loose. All the guests could be the villain or even become the next victim. Every twist and turn makes you suspect a different character could be the murderer until a fresh clue into the guests’ secret pasts turns your attention to someone else. With mounting suspense and an intricate plot, this thriller has it all. And when the murderer was revealed there was an audible gasp from the audience.

The big name in this production is Louise Jameson, as Mrs Boyle, who becomes the victim at the end of the first act. However the rest of the cast is so strong that they all deserved star billing.

And as is the tradition at the end of the play, the audience was urged to keep the secret of who did it ‘locked in your heart’.

The play premiered in 1952 and is celebrating the 64th year in London. This is your chance to become part of The Mousetrap phenomenon. Go and learnt the secret.

The Mousetrap continues at Lighthouse, Poole’s Centre for the Arts every evening until Saturday 5 March with matinees on Wednesday and Saturday.