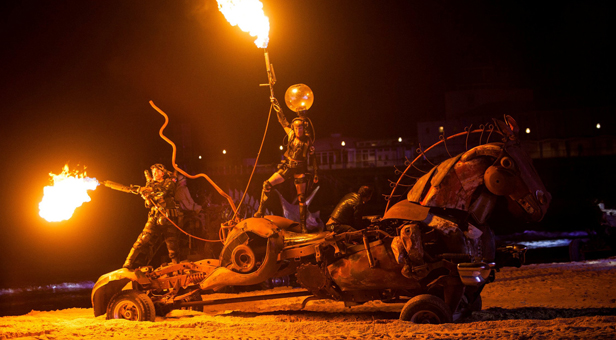 This weekend saw Bournemouth’s open spaces come alive with the opening weekend of Bournemouth Arts by the Sea Festival, introducing three weeks of arts events in the town.

In true festival fashion the headline act was something astonishing and spectacular – Joe Rush’s Mutoid Waste – a parade of giant articulated vehicles and machines and a spectacular show of animatronics, lights, sound and special effects. Joe Rush created the stage sets for The Rolling Stones at Glastonbury and art directed the London 2012 closing ceremony of the Paralympic Games, so it was no wonder the Mutoids took Bournemouth by storm.

But Joe Rush wasn’t the only act to cause a stir – other artists adding to the surreal atmosphere of the opening weekend included artist, composer and performer Ray Lee with his sound sculptures on giant metal tripods towering high above the crowds;  Michael Grubb Studio, whose ‘lighthouse’ light sculptures created a unique world of light and colour and Jem Finer’s Spiegelei-on-Sea, which reflected and magically inverted the world using the beautifully simple technology of the mirror and the lens.

Festival audiences enjoyed performances throughout the weekend from all kinds of artists including the only vintage mobile cinema in the country, which gave audiences a slice of cinema history with special showings of new animations for all the family; Valise Noire storytelling theatre which transformed the band stand into an alternative shoe shop, the swing and jive band The Regular Joes playing their heady brand of dance music from the jumpin’ jiving’era, eccentric tea-ladies, roving piano recitals, a taste of the 1950’s beach holiday experience through music and dance and even a crinolined lady, capturing the origins of Bournemouth as a spa town.

The whole opening experience came to a glorious finale with a very English interpretation of Venice’s one thousand year old Marriage of the Sea ceremony performed by over 100 local people.

Carol Maund, Festival Manager, says; “This weekend was a great start to what’s going to be a spectacular Festival. It was good to see so many people enjoying an end-of-summer party atmosphere.”

Bournemouth Arts by the Sea Festival is funded by an Arts Council Grant for the Arts and Bournemouth Borough Council.

Headline sponsor is Arts University Bournemouth. The Festival runs from 20 September to the 12 October.

For the full programme and more information about locations and tickets visit www.artsbournemouth.org.uk.