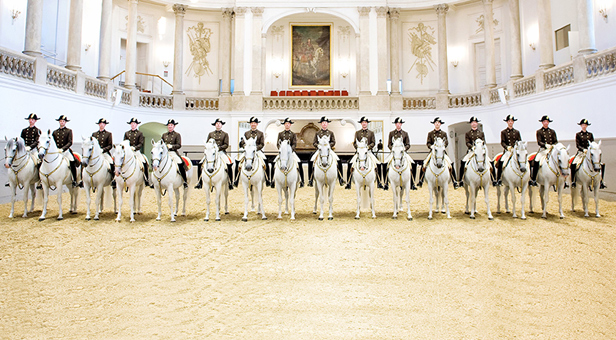 Due to the incredible success of their last UK appearances in 2012, The Spanish Riding School of Vienna are delighted to announce they will be bringing the famous Lipizzaner stallions back to the UK in 2014.

TV presenter and British Dressage Ambassador, Nicki Chapman will be hosting the event and will be joined by special guests making this 2014 Spanish Riding School of Vienna Tour one of the most unique, exciting and captivating events of the coming year.

Nicki Chapman commented:“The Spanish Riding School of Vienna very rarely perform outside of Austria but when they do they thrill crowds with their astonishing combination of grace and athleticism. I’m lucky enough to have been involved in the last two UK tours and it’s an experience that will stay with me for the rest of my life! The Spanish Riding School of Vienna has performed all over the world, and given several private performances to the Queen and other members of the Royal family but UK tours are rare and exceptional. This is a extraordinary once in a lifetime opportunity to witness these most celebrated, world renowned horses performing in the UK.”

Tickets on sale Friday 27 September 2013 prices from £20-£65 and available from www.livenation.co.uk