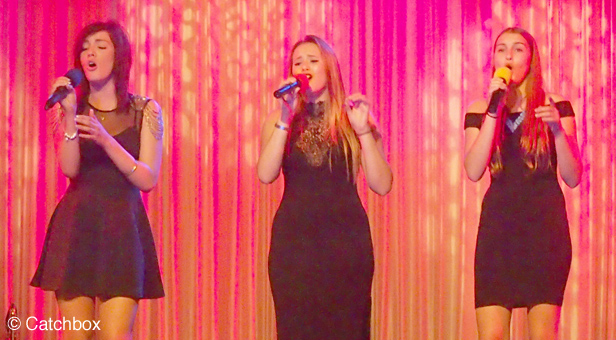 Having been to the heats of the Voice of Ferndown, I had some idea of the acts that would appear in the finals at the Barrington Centre on 4 October, but was blown away by their performances.

It was clear from the outset that the judges Matt Black, Tara Nix, deputy mayor Cllr Steve Lugg and Richard Sidaway had their work cut out. Opening with opera by Amber Thorne and closing with a popular Ed Sheeran song ‘Lego House’ by Harmony Twist, it was anybody’s guess as to who would be the winner.

The youngest contestant, Nicole McNally, aged 12, impressed with her strength of voice, and the oldest contestant and proud of it, 66-year-old Linda Sambrook charmed the audience with her beautiful clear tone. The boys performed strongly too. Joe Webster (16) had great energy and played a guitar well and Gareth Woodford (19) sang with power and passion.

But it was between the four goliaths. Katharine Levi brought the stage alive with a crowd-pleasing version of an Aretha Franklin number. Samantha Stevens belted out ‘Don’t Rain on My Parade’ like Streisand did in ‘Funny Girl.’ Amber Thorne’s high notes were like honey, but it was the last act, Harmony Twist with their stage presence and perfect harmonies that won the title.

The event, organized by the Chamber of Commerce in collaboration with the Barrington Centre, was so successful, it will be held again next October.

Ukrainian refugees to be welcomed in Dorset
March 29, 2022