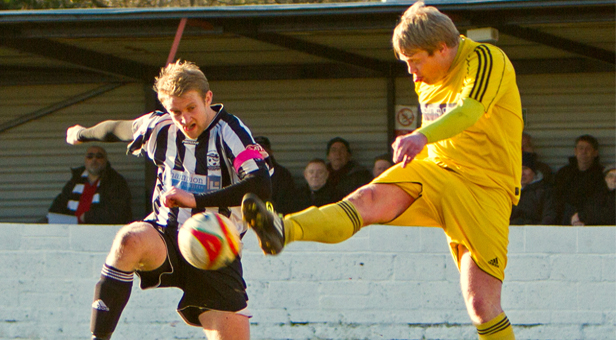 Wimborne Town FC received a major boost with news that influential midfielder, Jon Blake, is likely be ready for action by the start of the new campaign despite suffering medial ligament damage at the end of last term.

The 26-year-old picked up the knee injury in the final day clash against Mangotsfield United at Cuthbury.

The initial prognosis was that Blake would need surgery and that could have kept him out the game until November at the earliest. But following a meeting with a specialist he was given the go-ahead to start light training with full training in six to eight weeks’ time.

“I may miss some the early pre-season games, but hopefully I’ll be ready for the opening league game,” said Blake.

“Our manager Steve Cuss referred me to a private osteopath who thought I would need an operation.

“The results of a scan showed that the knee had suffered a grade 3 rupture – the worst possible type. But when I saw the specialist today he told me the injury was heeling nicely and I would be able to start light training.”