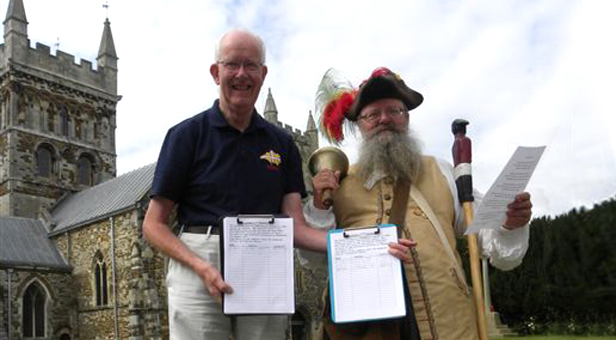 Despite the announcement that the Priest’s House Museum will take over the running of Wimborne Tourist Information Centre (TIC), the petition launched on 10 August ‘to save the centre in its present form’, will be delivered to the Resources Committee of East Dorset District Council at Furzehill on 25 September at 9.30am.

Organised by town crier Chris Brown and Anthony Oliver, MBE, former mayor, churchwarden and chairman of the Minster’s tourism committee, the petition calls on the district council to have a re-think on its recent proposals. These stated that the town’s TIC would no longer be council run as part of ongoing cost-cutting measures and the provision of tourism information would be reviewed. If no alternative plans came to fruition, the TIC would close in November with the loss of one full time and five part time members of staff. The tourism officer would also be made redundant.

He explained that the petition calls on councillors to ‘preserve the status quo’ by overturning the recommendations, which appeared to him to have been decided upon by the chief executive and senior officers of the council. “After all, should not the elected councillors be making the decisions?” He said.

The petition has over 4,000 signatures, which Anthony Oliver says shows the strength of feeling to retain the TIC as it is. He urges more people to sign the petition. It is available in a number of venues around the town, including Square Records and Edinburgh Woollen Mill in the High Street.

He also encourages those who support the petition to attend the council meeting to show the strength of feeling in the town and further field.