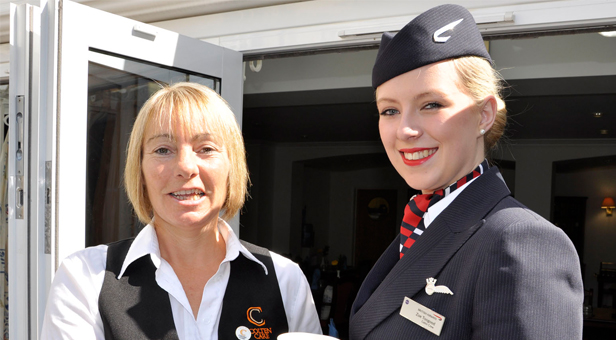 A waitress at a Dorset care home is flying high after seeing off thousands of other candidates to join British Airways’ cabin crew.

“It’s such a prestigious airline with very exacting expectations,” said Zoe, who lives in Three Legged Cross. “I was overjoyed to be offered an interview but extremely nervous when I went in. As it turned out, I was asked how I would manage a range of customer service scenarios. For all of them I was able to draw directly on examples from the care home.”

Zoe waitressed at Amberwood House for two years while studying an NVQ Cabin Crew Diploma at The Bournemouth and Poole College.

She added: “To demonstrate practical skills, I was able to talk about working with a diversity of people at Amberwood House and being familiar with high standards of food menus and table service. My experience with Colten Care has helped me understand how to approach people with respect and be sensitive to cultural differences, all prerequisites for cabin crew work.”

After swapping her orange and black Colten Care uniform for the pinstripe blue of British Airways, Zoe undertook six weeks of intensive training with the airline.

Her first flights have been to Nigeria, Japan and the Czech Republic. “It really is my dream job,” she said. “I love it.”

Between trips, Zoe returned to Amberwood House to wish her former colleagues well. Home Manager Maggie Tomlin said: “As an employer, it is good to know you have helped a team member’s employability and we all wish Zoe the very best in her career from now.”

Colten Care runs 19 care homes across Hampshire, Dorset and Wiltshire. Its services include residential, nursing, respite and dementia care. The family-run group is determined to set the highest standards in all aspects of care for the elderly.