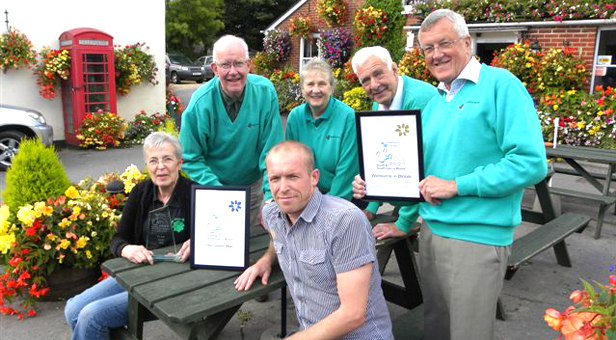 Wimborne Minster is celebrating two successes in the regional In Bloom competition.

Wimborne in Bloom received a silver gilt in the small town category for the second year running and the judges report stated that ‘Wimborne in Bloom is a long established entry working with the traditions of the bloom in an historical setting with a dedicated voluntary team,’  it particularly praised the fact that ‘the whole route was spotless with no litter whatsoever or any evidence of environmental abuse.’

The small town category attracted nine entries from an area that stretches from Dorset to Kent and the winner was Cranbrook in Kent.
In the discretionary awards, The Green Man in Victoria Road, Wimborne scooped the Pub Award in the region for its breathtaking display of flowers.
Richard Nunn, Chairman of Wimborne in Bloom speaking after the awards ceremony held in Royal Tunbridge Wells on 11 September said, “Thank you to everyone who has been involved this year and who has helped us to achieve such good results.”