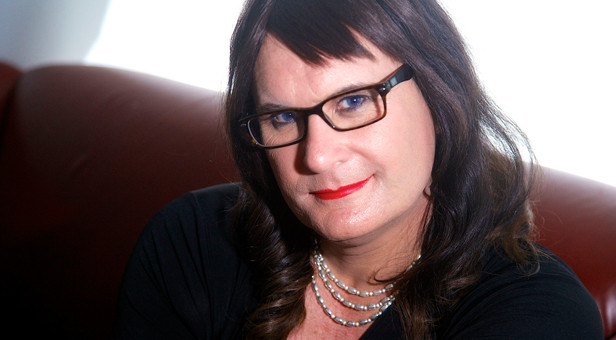 The last time she’d seen the players was at the parade to celebrate promotion the previous season as a twice married dad-of-three.

Sophie Cook, 49, feared a backlash as she started a new season as herself – after finishing the last season as Steve.

“Stood on the pitch at Charlton shooting my childhood team crowned as Football League Champions, a dream come true, I was terrified that this was to be my last ever match in football. I’d already decided that I was going to come out as transgender during the summer and I thought that I’d lose everything.”

The first transgender woman in UK football says that she has been “totally accepted” by players and fans after decades of feeling trapped in the wrong body and now she’s on a mission to help others overcome their fears to live to their full potential.

The RAF veteran and former motorbike racer, newspaper editor, and rock photographer, is refreshingly frank and open. Drawing from her experience of post traumatic stress after saving a colleagues life in the RAF, two decades in business, and her lifelong struggle with gender dysphoria, depression, self harm and suicidal feelings she examines the nature of fear and some ways of looking at it differently.

“Despite all of my success I lived my life in fear, of loss, of failure, of success, of being sad, of being happy, of myself, of being outed, of being loved,” Ms Cook revealed.

“Because of these fears, no matter how hard I pushed myself to succeed subconsciously I would self sabotage and stop myself from reaching my full potential.

“Now I talk about these fears and how I overcame them to be true to and, finally, start loving myself.

“People are held back in life by their fear, in their personal life, relationships, business or professionally. Fear of failure, fear of success, fear of losing someone or their job, fear of life.

“In my talks I discuss the fear of change and how we can reframe our experience of fear to enable us to reach our potential, lessons I learnt on the painful road through loss to my ultimate redemption.”

Married and with three children, she told her family she was transgender last summer, began taking female hormones, lost five stone in four months, and got hair extensions.

Ms Cook, whose original weight was 23st, now weighs 17st after taking up running, including half marathons and starting an Aloe Vera based diet.

“My wife knew I was transgender when I met her but when our son was born disabled and we nearly lost him, I realised we already had enough to deal with and I couldn’t put my family through it.

“I took Sophie, put her in a box and buried her for 15 years of hell.

“Every day I thought about suicide. It was a horrible, lonely, painful place to be.

“When, last year, I told my wife that I was finally going to transition she said she always knew it would come back. She’s a wonderful woman and though we are no longer man and wife, we are best friends.”

The couple had been married for 10 years and separated last year, though they are still good friends.

“My children were brilliant. After I posted a poem on Facebook to thank Steve for his strength over the years my daughter responded: ‘You’re my hero. Steve was great but Sophie is better’.

“Now, when I look at old photos of me with the family as Steve, I just look dead, I look like a zombie.”

Ms Cook, who now tours the country giving talks about conquering the fear of change, said: “I don’t have to hide anymore.

“My life before was like being in Kansas, it was all black and white, and I was totally disconnected and now I’m in Oz and it’s all technicolor. The most amazing thing is that I’m so happy, I never realised it was possible to be this happy.”

“I didn’t choose to be transgender but I did choose not to be a victim.”

Sophie brings her show, Grab Life By The Balls, back to her hometown of Bournemouth on Thursday, 14January at The Village Hotel. Doors 7.30pm, on stage at 8.00pm. Tickets are priced at £10 and are available at www.sophiecook.me.uk

Free parking in the run up to Christmas in Dorset
November 23, 2021

Dorset remembers the fallen during parades and services around the county
November 16, 2021