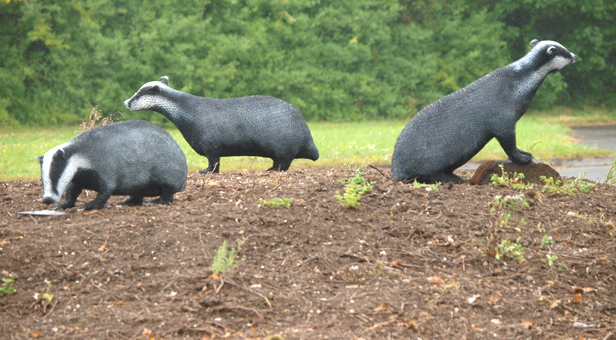 Three larger-than-life badgers may cause you to do a treble take at the roundabout near the Hall & Woodhouse brewery in Blandford, just so you can assure yourself that they are not real.

Hall & Woodhouse, brewer of Badger beers, approached local artist Helen Godfrey to design a sculpture, which captures the essence of the Badger brand to form the centrepiece of the roundabout.

Helen has sculpted the badgers from galvanised chicken wire, and they were recently installed on the roundabout in time for the Brewery’s Founder’s Day celebrations on Friday 7 June.

The badgers have been safely secured using concrete and iron rods with help from Dorset County Council and Dorset Highways, and the roundabout has been sown with native chalk-land wild flowers and grass seeds.

Commenting on the badgers, managing director Anthony Woodhouse said: “The Badger ales logo is one of the oldest trademarks in the UK and badgers have featured in the Hall & Woodhouse company logo for more than 100 years.  We are all proud of this long-established identity and hope that by placing the badgers on the roundabout as part of our sponsorship, we are enhancing the local area and will bring pleasure to everyone who sees them.”

The badgers have received many positive comments complimenting the brewery on the installation such as:

To all the Woodhouse family, and all their employees, may I just say what a splendid sight now on coming into Blandford, from the Dorchester road, ie, the badgers on the roundabout. As an ex-Blandford resident, and where my three grown-up children still live, it’s an absolute credit to Blandford, and of course the brewery. It made me feel very proud to see such a thing. Well done the brewery, may you always, always continue. Kindest regards, Jenny.

Helen Godfrey initially began using galvanised wire as a frame for her papier-mache work, for which she won a bursary from Dorset Arts and Crafts in 1997. Helen has since developed the wire as an art form in itself, with inspiration for her work coming from the surrounding wildlife where she lives in rural Dorset. She also specialises in life-size human figures.  Helen has exhibited at garden openings and undertaken commissions for gardens across the UK and internationally.  Her work has been featured in many publications such as The English Garden magazine and Dorset magazine.