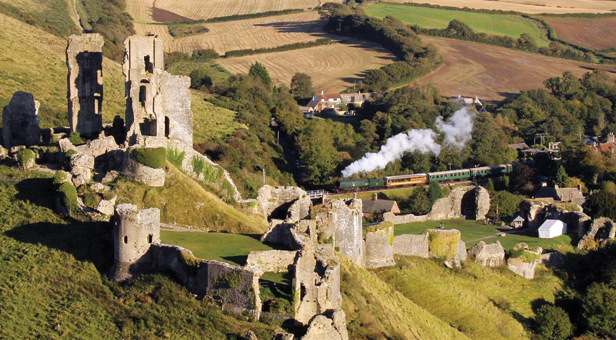 Tributes are being paid to a determined woman who formed a pressure group preventing a by-pass from being built on the disused railway track-bed through Corfe Castle during the 1970s and 1980s.

Monavyn Moss – who has died at the age of 94 – ensured that the Swanage Railway could be steadily rebuilt through the village during the early 1990s to connect with the national railway system at Motala near Furzebrook during 2007.

Mrs Moss, known as Monni, formed the Corfe Castle Eastern Preservation Group and was its chairman from 1982 to 1995 when the Swanage Railway opened its three mile extension from Harman’s Cross through Corfe Castle to the Norden park and ride station.

Swanage Railway Trust chairman Liz Sellen said: “Everyone on the Swanage Railway is very saddened to hear of Monni’s death and our condolences go out to her family and friends at this very difficult time.

“Without Monni’s determined campaigning work, there would not be the Swanage Railway that so many people enjoy today because the line would only have been relaid the three miles from Swanage to Harman’s Cross.

“A by-pass on the railway trackbed through Corfe Castle would have meant that the Norden park and ride scheme – taking thousands of cars off the narrow and winding A351 road to Swanage every year – could not have been built.

“The Swanage Railway would also not have been connected to the national railway system and special excursion trains from various parts of the country would not be bringing some 500 passengers a time into Swanage,” added Mrs Sellen.

Swanage Railway founder member and volunteer Peter Frost knew Monni for many years and campaigned alongside her. He said, “Monni was a very special lady who was prepared to raise her head above the parapet and lead a fight for her community, a fight without which the Swanage Railway as we now know it would not exist.

“She affected the course of history in Corfe Castle – as did Lady Bankes who defended the castle at Corfe against two sieges mounted by Oliver Cromwell’s Parliamentarian forces during the Civil War of the 17th Century.”

With the shelving of long-term plans for a Corfe Castle by-pass, Dorset County Council offered a lease of the disused railway track-bed between Harman’s Cross, Corfe Castle and Motala near Furzebrook to the Swanage Railway.

“The rest is history,” explained Mr Frost who has been driving steam locomotives on the Swanage Railway since the late 1970s.