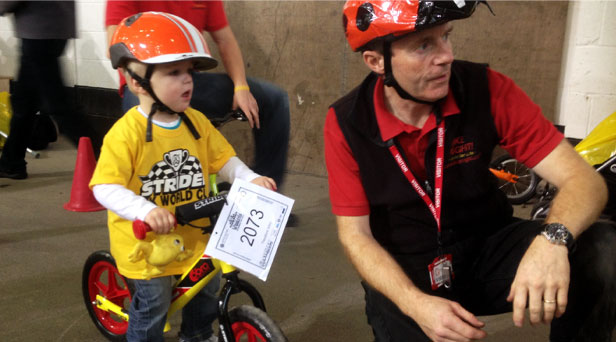 Local rider, Theodore Scott-Munden (2), from Chandlers Ford is in training for the biggest ride of his life at the first qualifying event of the STRIDER™ British Balance Bike Championships in Merton early next month.

He will be joining hundreds of other riders vying for the sought-after qualifying spots for the British championship finals later in the year at the home of British cycling.

The overall championship winner will win the chance to represent Great Britain in the Strider World Championships in Florida.

“The Strider balance bike racing event has given Theodore the chance to not only ride over a BMX track but race against other children in his age group for the chance to be crowned the best in Britain” said Theodore’s dad, Simon. “Having found out about the Strider Championship events in March we had to register straight away to book his race slot – there really is nothing else like it out there.”

Theodore added: “I can’t wait. I love going over the bumps and racing.”

The 2013 Strider British Balance Bike Championships will have five major qualifying events that will kick off in London on Sunday, 5 May at the Merton BMX track. The championships will then visit Gosport (June 16), Gravesend (July 21), Birmingham (August 21) and finish in Manchester at the home of British Cycling (September 22).

With places still open for riders to join the opening event on 5 May in Merton, organisers are urging interested families to register before the event fills. Visit www.stridercup.org