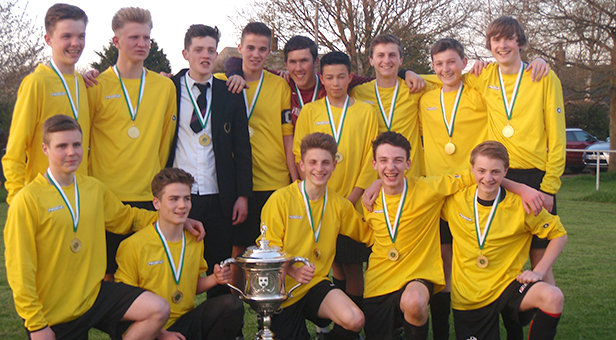 The game at Stourpaine Football Club was balanced on a knife edge for the first ten minutes with both teams attacking either end. Poole Grammar scored from an excellent cross across the Ferndown goal area, (1-0).

Ferndown then hit back immediately with a superbly placed free kick from Henry Lander to the chest of Sam Surridge who slotted it in, (1-1).

Ferndown increased their lead by an excellent solo effort from Josh Wagstaff leaving the score 2-1 at half time.

After the break it seemed that Ferndown were still in the changing rooms for ten minutes as Poole Grammar relentlessly attacked Ferndown’s half. their pressure rewarded with an excellent shot from the Poole Grammar player from outside the box which looped and curled around Ferndown’s keeper Kieran Andrews, (2-2).

This was the wake-up call that Ferndown needed and they started to play football, linking passes and creating space.  Both sides were attacking each other’s goal until a free kick was awarded to Ferndown for a late tackle on Taylor Wake.  The free kick was taken by Sam Surridge and as it curled towards Poole’s back post, Elliot Lines headed it in, (3-2).

With half an hour still to play both teams battled hard and Poole continued to press hard.  Keeping their nerves Ferndown held out with some impressive defence lead by captain Henry Lander.  with three minutes to go Poole Grammar sent most of their players forward to play for extra time.  However this tactic proved profitable as a big clearance from defence met Taylor Wake who turned ran past the defence and scored Ferndown’s fourth goal from outside Poole Grammar’s area and sealing victory for Ferndown.

The whole team played with focus and commitment and thoroughly deserved the victory.

Man of the Match was awarded to Elliot Lines for his epic heroics in man marking and his goal.