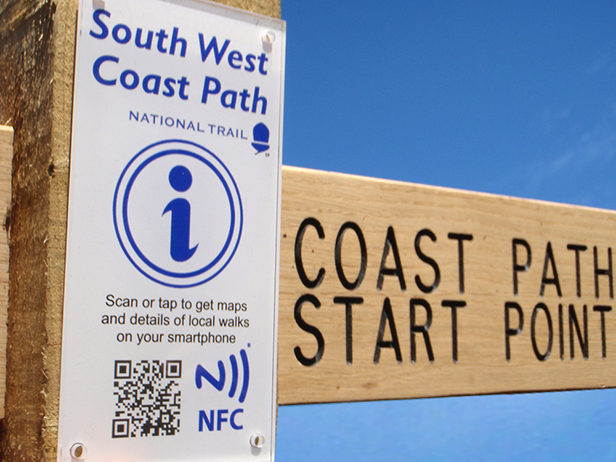 The South West Coast Path is pioneering the use of new mobile phone technology to make it easier for people to search for local walks on the go. New signs, which have a QR code and Near Field Communication (NFC) chip, are being added to existing wooden sign posts at key car parks along the Coast Path to upgrade them to ‘digital fingerposts’. These are now in place at various points along the route in South Devon, including Start Point (above), and will gradually be rolled out across the entire 630-mile trail. Using the digital signposts, smart phone users will now be able to scan and download quickly and efficiently more than 500 walks from the South West Coast Path website.

Says Andrew Measures, 39, from Ashburton in Devon, who was among the first to test the Start Point digital fingerpost sign: “I’ve been really impressed by how quick and easy it was to get the walk on my mobile phone, and it’s been great being able to discover a new route I’d never have known about. I think this new mobile phone technology will revolutionise the way walks are planned in the future.”

Mark Owen, South West Coast Path National Trail Officer, adds: “While most people will be familiar with QR codes, which can be scanned by downloading a free QR reader app, NFC chips are simpler to use, and take advantage of the touchless technology that is built into most Android and Windows smartphones. When a phone is gently tapped against the sign it then instantly opens up a web page with local walks on. As the NFC chips are cheap, robust and require no battery power or on-going maintenance it was fairly simple to add these to our new signs. This, coupled with our newly launched mobile website, makes us truly accessible for walkers on the go.”

Smart phone users can also download walks via a QR code at key access points on the South West Coast including mainline railway stations such as Barnstaple and Penzance, and smaller branch lines, such as Looe and Exmouth.

For an example of what walkers will see when they use one of the new signs, scan this QR code (left).

This project is part of the Strand 3 element of Unlocking of our Heritage project. For more information, visit www.southwestcoastpath.com/RDPE