The Ukulele Orchestra of Great Britain

Lighthouse, Poole’s Centre for the Arts 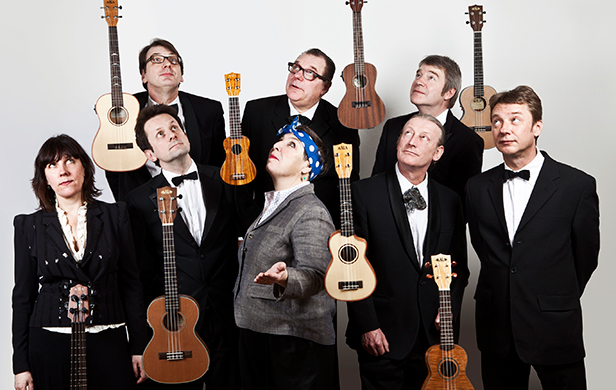 What started as a bit of fun for eight ukulele enthusiasts over 30 years ago, has ended up as a way of earning a living.

The musicians, in formal attire sit seriously on stage and play ukuleles of varying sizes from the almost invisible, to the big bass (about the size of a small child’s guitar). “It is the future and you can’t fight it,” says the wryly serious George Hinchliffe. The orchestra has already paid tribute with ‘Running Wild’ to the great ukulele player Marilyn Monroe, so for those who don’t know the orchestra, it’s clear their droll sense of humour will spring a few surprises.

These include a whistling solo by bassist Jonty Bankes; a song about a sheep and a tree, ‘Only You’ which takes a bit of bleating, a burst of ‘Carwash,’ and an incredibly fast ‘Limehouse Blues’. A sea shanty creates a Pythonesque discussion over Who, Yes, A-ha and Them resulting in a mean ‘Pinball Wizard’ and of the mash ups and mutations, the Jungle Book’s ‘I wan’na be like you’ rolled in with Formby’s ‘When I’m Cleaning Windows’ is a classic.

The orchestra also puts a great new spin on old songs, for instance, the new Russian version of Formby’s ‘Leaning on the Lamp Post’ that peaks at the speed of light and the tongue in cheek Yorkshire folk song ‘Wuthering Heights’.

The Ukulele Orchestra of Great Britain has good on stage rapport, interacts with its audience and gives a humorous, yet professional and musical night of entertainment. They are all good singers too, offering great solos and harmonies. A must see, this orchestra appeals to all ages.