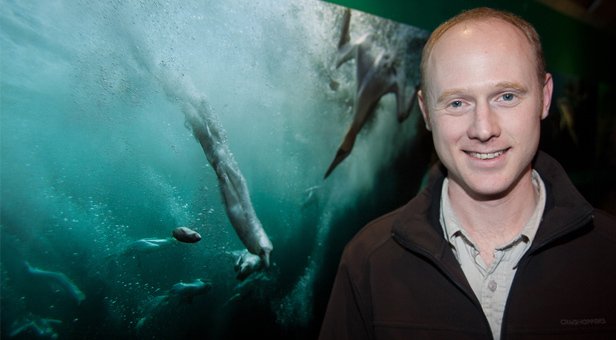 Dr Matt Doggett took a packed room of over 100 people on an incredible underwater journey at Moors Valley Country Park on 1 February. Speaking at a special preview of the British Wildlife Photographer Awards exhibition, Matt who took the overall winning shot, showed a wide range of his work, from meerkats in South Africa to the first photograph of a snakelock anemone shrimp in Britain – discovered tucked under Swanage Pier.

Matt’s winning image was shot underwater off the coast of Scotland and depicts the clean lines of the gannets as they dive for mackerel. Following his still presentation, he treated his audience to a short video filmed underwater at exactly the same time as the winning photograph. The scenes of underwater rivalry showed just how difficult it must be to capture one striking image amongst such a stream of non-stop action.

Matt’s advice to would-be wildlife photographers then struck a chord with many in the room, “Learn to expect the unexpected, and if you can, be prepared for it!”

Ninety stunning  images of British wildlife, including Matt’s award-winning ‘Gannet Jacuzzi’, form the British Wildlife Photographer Awards exhibition and can be seen at Moors Valley Country Park until 17 March. The exhibition opens daily and admission is free, but parking charges will apply. For more information go to www.moors-valley.co.uk.