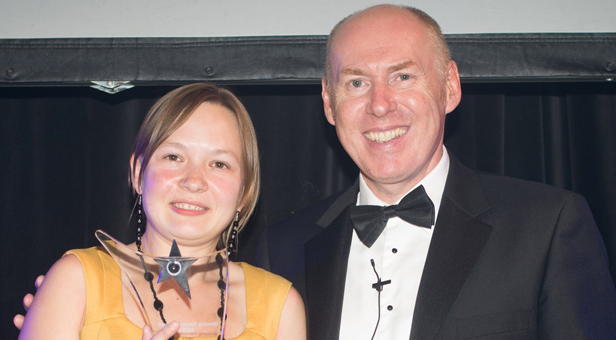 A dedicated housekeeper whose role it is to ensure high standards of infection control are maintained at the Royal Bournemouth Hospital has been named the Trust’s Unsung Hero of 2013.

Magdalena Taranowska was presented with her award during the Trust’s Staff Excellence Awards evening on Thursday 5 September.

She has been with the Trust since 2009 and works within the Stroke Unit at the Royal Bournemouth Hospital. Her dedication to her role and high standards are regularly praised by both colleagues and patients. Nominated by Trust governor Keith Mitchell, Magdalena was described as being “one of the most dedicated cleaning staff in the hospital” and highlighted as an example to others for her attention to detail and having a ‘can do’ attitude to her work.

On winning her award, Magdalena said: “I am so proud to have won this award, it was a wonderful night and so well done. I didn’t expect to win at all and everyone on the Stroke Unit has been very excited for me.

“I get satisfaction from my job and it’s nice to get feedback from the patients. I like to create a relaxing environment for them because I know that has an impact on their time here. It means such a lot to know that a housekeeper is appreciated by others in the hospital, it’s a nice feeling.

Each year, the Trust’s Staff Excellence Awards recognise those who consistently go the extra mile to make the patient experience the best that it can be. The Unsung Hero Award was chosen from nominations made by members of the public as well as staff. The other awards presented on the evening were: