Watercolour paintings reach over £200,000 at auction 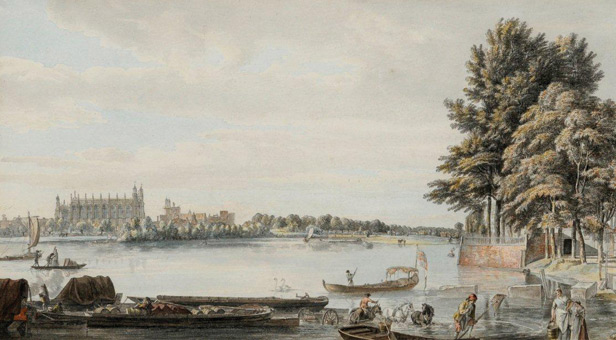 Lawrences recent auction of pictures went ahead despite a heavy fall of snow in Crewkerne on the morning of the sale. “We were inundated with commission bids, telephone bids and online bids,” said the firm’s managing director, Helen Carless. “In the event, the sale was as well-received as ever and the results were even better than we might have hoped.”

A small and faded watercolour of a monastery in Macao was found amongst a selection of watercolours consigned for sale by a Devon gentleman. This made £4,060. A work by London-based Japanese artist Yoshio Markino, showing figures strolling in a park made £4,780 and a visionary 1943 pastel by Eric Kennington of chivalrous knights made £7,400.

The undoubted stars were two exemplary watercolours from the 1770’s by Paul Sandby depicting scenes at Windsor and Eton. It is generally agreed that the artist’s finest works were produced in Windsor and the two watercolours were in remarkable condition. These had come from the late Victorian collection formed by the late Colonel `Eddie` Balfour, formerly of Sidmouth Manor, and met with exceptional interest to make a combined total of over £230,000.

The picture sale exceeded half a million pounds with under 15% unsold.