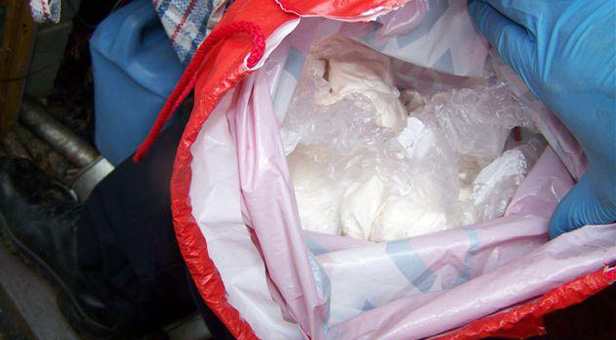 Two Weymouth brothers and their father will serve more than two years each in prison after being found guilty of drug offences.

Robert John Look, aged 67, and his sons, 20-year-old John Joe Darch and 18-year-old Storm Darch, formerly of Beverley Road in Littlemoor, were arrested on 7 March 2012 after a drugs warrant was executed at their home address.

Dorset Police recovered a large quantity of the class B drug methedrone, a quantity of cash and a Taser gun.

Storm Darch was also subsequently arrested following the execution of a further drugs warrant at an address on Bayard Road in Littlemoor on 6 July 2012, during which quantities of heroin, methedrone and amphetamine were located along with a quantity of cash.

All three men appeared at Bournemouth Magistrates Court on 17 June 2013, where John Joe Darch pleaded guilty to being concerned in the supply of methedrone.

At the same hearing, Robert John Look pleaded guilty to possession of criminal property relating to the cash recovered during the March 2012 warrant.

Both Storm and John Joe Darch were sentenced on 19 July 2013 at Dorchester Crown Court.

Storm received 28 months in prison for the drug offences, and a further 4 weeks for possessing the Taser, while John Joe was handed a two year sentence for his involvement.

Robert Look was handed a 9 month sentence for possession of criminal property at Dorchester Crown Court on 26 July 2013.

A stash hidden under floor tiles

Detective Constable Ian Frizzle, of Dorset Police County CID, said: “This has been a fantastic team effort by all of those involved in this case at Dorset Police, which includes CID, the safer neighbourhood team, section officers and other Police staff.

“The sentences handed down to both Storm and John Joe send out a clear message that we are clamping down on this type of organised crime and it will not be tolerated by the Force or the courts.

“This was a carefully planned family drugs operation run as a business by Robert Look and his sons, and this has had a detrimental effect on the Littlemoor estate and those that live there.

“We hope these sentences will help make residents in the area feel safer.”

Images were taken at the Beverley Road address