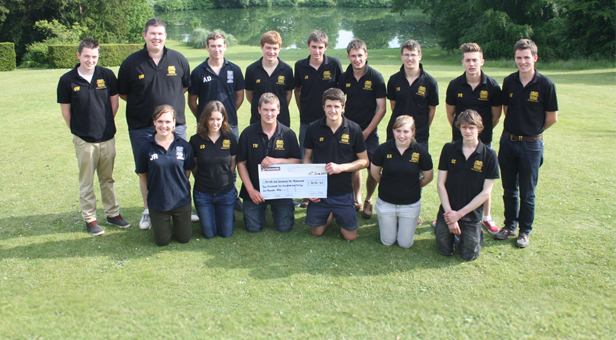 Students from the Level 3 Extended Diploma in Agriculture held the Annual Kingston Maurward College charity Muckathon during April and raised a record £2,636.60 for Dorset and Somerset Air Ambulance.

The event involved spreading 1200 tonnes of farmyard manure, followed by ploughing 70 acres of land over a period of 36 hours.  Ten tractors, three ploughs, three tele-handlers and six dung spreaders were just some of the equipment needed to achieve such a task.  Nearly 800 litres of diesel was used, kindly donated by Upton Oil.

The Kingston Maurwood College charity Muckathon has been going for 11 years.  This year the students organised the whole event themselves and had to beg and borrow from local dealers, farmers and contractors who loaned machinery and equipment for the event.

Toby Wonnacott and Oliver Yeatman, KMC Agriculture students and fundraisers said, “We are thrilled that this year’s Muckathon has raised the most amount of money ever for Dorset and Somerset Air Ambulance.  We would like to thank all the companies who kindly contributed to the event as we could not have raised as much as we did without their help.  Also a big thank you to all the students who worked so hard on this years event.”

Tracy Bartram, Dorset and Somerset Air Ambulance Communications Manager attended the cheque presentation and said, “Kingston Maurwood College students have been supporting the charity for a number of years and have always come up with creative ways of generating funds.  With no direct government or National Lottery funding we rely on public donations and charity events such as this to keep flying.  This group of students really pulled it out of the bag this year.  Their hard work and enthusiasm is so appreciated and we can’t thank them enough.”