Who will be kings? 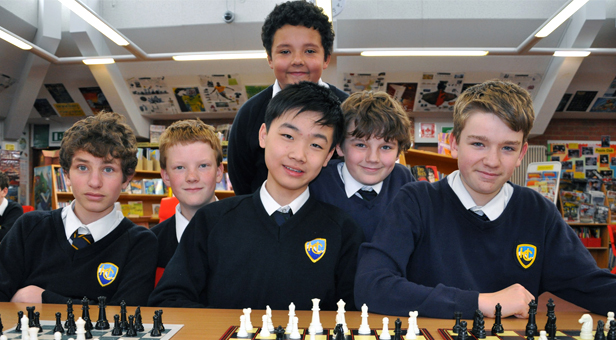 Chess-crazy students will be hoping to make it checkmate when they pit their wits against Bournemouth’s best young players on 18 April.

Over the past 12 months, boys at Harewood College have  fallen under the spell of this mind-challenging game ­– so much so that their new found skills have seen them reach the final of the Bournemouth Mayor’s Senior Schools Chess League.

Executive headteacher, Debbie Godfrey-Phaure, said: “Chess has really taken the school by storm. It is so popular that dozens and dozens of boys use part of their lunch break to play the game.

“It takes a great deal of skill, concentration and intelligence and it’s wonderful to see them get so absorbed in it.

“We now have two chess teams who have done brilliantly to showcase the school’s passion for the game and we wish them every success for the big final with Bournemouth School for Boys.”

The chess enthusiasts from Harewood have gone from being rookies to masters in a short space of time thanks to the help of two dedicated volunteer chess coaches.

Eric Sachs from Poole Chess Club and Paul Errington from Bournemouth Chess Club give up their time every week to help coach the boys. In just over a year the number of students playing chess has risen from three or four to more than 70. Eight boys will be helping to put Harewood on the chessboard when they play in the final. They are Connor Duburguet, Steven Speck, Alex Haynes, Ralph Linder, Victor Bueno, Jiaho Zhang, Richard Coles and Zac Butt.