Wimborne Town get back up again to thrash Tiverton Town 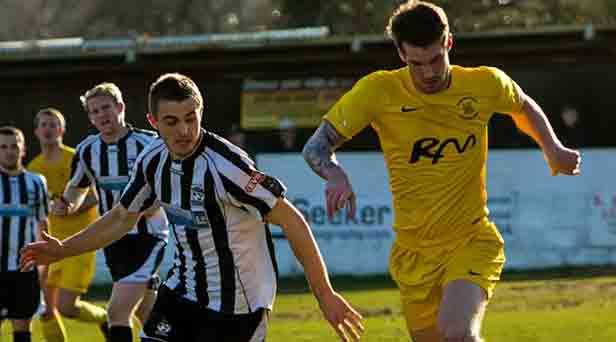 The previous Tuesday Wimborne had gone down 3-1 at Yate Town with Cuss saying: “Defensively we were disappointing. We gave away sloppy goals and that cost us the game.”

Those frailties had disappeared for the visit of Tiverton with Micky Hubbard putting the Magpies into the lead from the penalty spot and Alex Moth, on loan from A.F.C Bournemouth completing the scoring with his first goal for the club.

The victory saw Wimborne reach their highest ever points total in the Southern League with still another 13 games to play this term.

The Magpies travel to Bridgwater Town this Tuesday evening, more details next week.

This coming Saturday, Wimborne take to the road again when they visit North Leigh, kick off 3pm. Then on Wednesday (27th Feb) evening they face Weymouth at Hamworthy United in the Dorset Senior Cup semi-finals, kick off 7:45pm.

Wimborne’s home, Cuthbury, is the venue for the first semi-final between Poole Town and Gillingham Town, being played 24-hours earlier (Tues 26th Feb), also with a 7:45pm start.