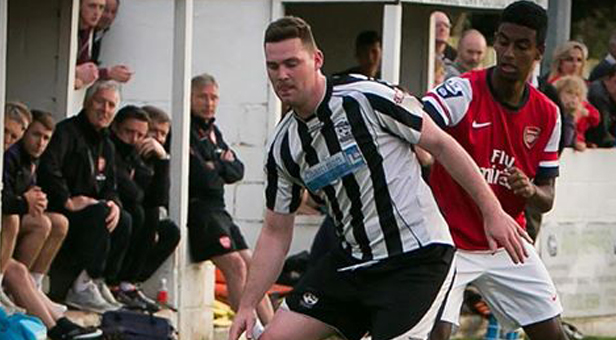 Wimborne Town FC boss Steve Cuss is hoping new signing James Stokoe will provide the extra power up front to forge a playoff challenge from the Magpies in the forthcoming campaign.

Speculation that the 27-year-old was Cuthbury-bound was stirred up after he appeared in Wimborne colours in a friendly against an Arsenal XI last month.

Stokoe returns to Cuthbury following a two-year spell at Southern League Premier Bashley. He departed Wimborne in the summer of 2011, but despite the big man’s exit, Cuss admitted he had been keeping a close eye on the striker.

“I didn’t want James to go,” said Cuss “I’d been keeping an eye on him ever since.”

“He’s played at a higher level with Bashley and will provide us with valuable experience.”

Meanwhile, Stokoe admitted: “I’m delighted to be back. It’s the right move at the right time.

“After my spell with Bashley, Wimborne was the only club I wanted to join.”