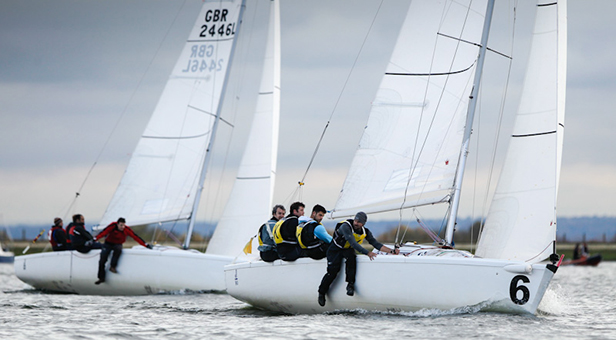 During the winter months of 2012/2013 Weymouth and Portland National Sailing Academy (WPNSA) have been the host venue for the RYA Winter Match Racing Series running from December 2012 through to April 2013.  The competition takes place in the former Olympic class Elliot 6m boats and combines part-training, part-competition with RYA coaches and a full umpire team on hand at each event as part of a programme designed to kick-start the development of UK National Match Racing.

To date, the first three weekends have been a huge success, with a range of weather conditions testing the sailors. Eight teams participate each weekend with the highest placed skipper of each qualifier event earning their place to attend the RYA Winter Match Racing Final weekend on 20-21 April 2013.

The idea of the series is to provide a transition from dinghy sailing into keelboat sailing and then potentially onto the British Keelboat Academy. WPNSA prides itself on hosting the 2012 Olympic Games but also recognises the need for sustained development within the sport.

“The Games were not a one off, but a springboard to ensure there is a continuing and lasting legacy in Dorset and the United Kingdom. We hope to inspire young and old in the ‘afterglow’ of very successful Olympic and Paralympic sailing events, and the RYA Match Racing Series is showcasing some real potential talent for the future,” said John Tweed, Chief Executive of WPNSA.

Sailors approach the weekends with huge determination to learn and compete at the highest level. Ultimately, a new foundation for Match Racing is being developed with experts following the racing and giving top tips at key moments, followed by intensive debriefs lead by the umpires and an emphasis on constructive collaboration between teams. Sir Ben Ainslie CBE who is no stranger to WPNSA waters also spent a part of his career match racing and this summer will be competing in the America’s Cup in the waters of San Francisco.  He said: “Match racing is one of the most tactical and intense forms of racing, whatever boat you sail in and is something every sailor should experience and train in. This racing discipline offers new styles of boat on boat tactics which can assist in a number of fleet racing situations. I am always keen to see match racing being developed at a national level and am delighted that the WPNSA is hosting the Royal Yachting Association Match Racing Series this year.  WPNSA will ultimately play a key role in producing some future match racing stars and equally will let everyone get involved in such an exciting part of the sport of sailing.”

The penultimate weekend is due to see university teams return who have competed previously on 23-24 March 2013. The final weekend of the RYA Winter Match Racing Series will conclude on 20-21 April 2013, promising to be a highly contested event between some of Britain’s future sailing stars.