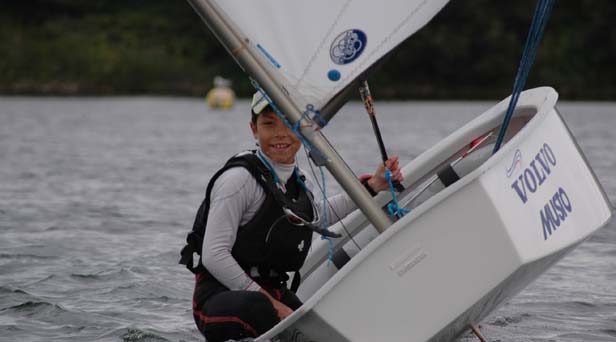 Milo Gill-Taylor, aged 13, from Spinnaker Sailing Club near Ringwood, has won the Optimist World and European selection trials in 2013 for the 2nd year in succession.

Milo had an amazing regatta with one 1st place, seven 2nd places, a 5th and a 6th.  By winning the UK event, Milo has qualified for the UK Worlds Team for the third year in succession, an amazing achievement given the high standard of sailing. The Optimist dinghy is sailed and raced by complete beginners through to future Olympic Champions, Milo is currently the top British Optimist Junior Sailor. The Optimist is the biggest youth class in the World with an International fleet of over 150,000 registered boats. The UK Optimist World and European selection trials are open to the top 80 Optimist sailors in the UK who compete for five places at the annual World Optimist Championships, held this year in August at Lake Garda, Italy.

Milo was the youngest ever sailor to qualify for the Optimist Worlds Team.  He learnt to sail at five at Spinnaker Sailing Club, and started racing at seven. In pledging support from Spinnaker Club for Milo to attend the 2013 Worlds at Lake Garda, the Commodore and Committee said Milo’s determined attitude, natural ability and above all love of sailing combine to make him a truly world-class sailor and wish him the best of luck at the 2013 Optimist World Championships.