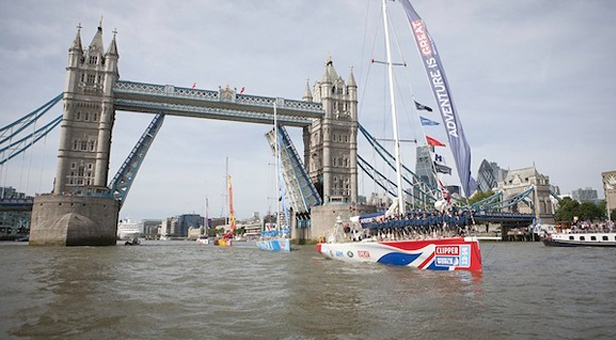 Waved off by crowds in excess of 120,000 lining the bank of the Thames on Sunday 1 September, Ellen MacArthur Cancer Trust ambassador Kristie Reid (20) and her crew onboard 70-ft yacht ‘Great Britain’, led the fleet of 12 Clipper boats and a flotilla of spectator vessels in an iconic parade through Tower Bridge and down the Thames, as they embarked on the start of their 40,000 mile race around the world.

Kristie, who was diagnosed with Biphasic Synovial Sarcoma in August 2009, a rare form of cancer that formed in the joint of her left shoulder, first learnt to sail with the Ellen MacArthur Cancer Trust after finishing treatment in February 2010 and is now part of the 19 strong crew on board team Great Britain taking on a challenging 5,630 miles crossing the Atlantic Ocean to arrive in Rio de Janeiro, Brazil.

After an exciting start to the race, team Great Britain took the lead for the first hundred miles as the fleet skirted the south east coast of the UK overnight, however light tricky conditions caught the British team out as they hugged the coast past Hastings, allowing the tightly packed fleet to slip past and gain an advantage as team Great Britain struggled in the light winds.

Great Britain skipper Simon Talbot explains, “The excitement of leading the fleet for the first hundred miles or so yesterday has given way to the frustration of playing catch up as most of the fleet sailed round us whilst we languished in a wind hole off Hastings.

The whole fleet has now been re-arranged in the order they came out of the light wind lottery and we are currently lying in around eight or tenth position depending on how you measure it. The race is still young and motivation to claw back the places is still high despite the frustrations that Mother Nature has dealt us.”