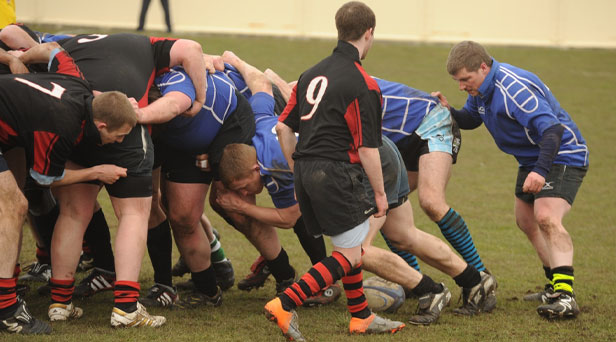 A team of young offenders had the chance to tackle Dorset Police on 27 March at Portland.

The rugby scrum down took place at the Young Offender Institution and was played in good spirits.

Due to operational commitments, the Dorset Police team was only able to initially field 12 players, so two young offenders and a prison guard kindly filled in.

The closely fought fixture was won by Dorset Police beating the team of young offenders 15-7.

This was the second time the teams have played against each other in recent years, with the Dorset Police team winning the previous encounter in 2010.

The fixture was created to offer inmates involved in the prison rugby programme a chance to compete against another team and to create positive interactions between young offenders and the police.

Assistant Chief Constable James Vaughan watched the game and said: “This was a great match, played with exceptionally good spirit.

“I am very grateful to Dorset Police officers for giving up their own time to provide an opportunity for young offenders to engage in something positive and worthwhile.

“It was, in many ways, inspiring to see incarcerated young men, working together as a team and putting their energy to good use.

“This was my second visit to the Young Offender Institution and I am a huge supporter of the work that the governors and officers undertake to turn offenders’ lives around.”