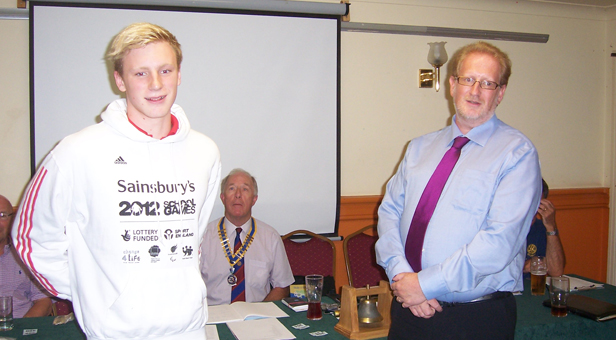 The photo depicts Jack Burton, an ex-student of Ringwood School, and has father Nigel, after receiving some sponsorship from the Rotary Club of Ringwood towards his attendance at the World Schools Games in Brazil for swimming in November this year.  He now trains alongside the likes of Tom Daley at the elite swimming academy at Plymouth College.

Jack gave an excellent presentation to the Rotary members, and in his address he said  – “I started club swimming at 8 years old and progressed through swimming at county and later regional levels. Nationally I am often ranked first or second in my age group for the three breaststroke events, I have been selected for England Talent training camps and the Beacon Programmes. I qualified for Olympic Trials which were swum last year in the Aquatic Centre at the Olympic Park. It was very exciting to be one of the first to swim in the Olympic pool. Later that year I was selected for the England South team at the UK school games. I won gold for my team. In the last two years I have medalled at National Championships despite being one of the youngest in my age band. In September 2012 I took up a scholarship to attend Plymouth College an independent school with an elite swimming programme. I now train with Plymouth Leander alongside a number of Olympians under the eye of head coach Jon Rudd. This has been a hugely exciting opportunity and has given me access to the very best facilities and coaching expertise.”

“In May,” continued Jack, ” I received a selection letter inviting me to represent England at the World School Games but also stating that parents may have to make ” a significant contribution to the cost of travel and accommodation” and suggested that I look for sponsorship. I have been extremely lucky and have received funding from Hampshire County Council, Ringwood Rotary Club and a number of interested individuals. Sport England have now also contributed to support the whole team and this has made a huge difference to everyone. The money will be spent on travel, team accommodation, kit and vaccinations required.”