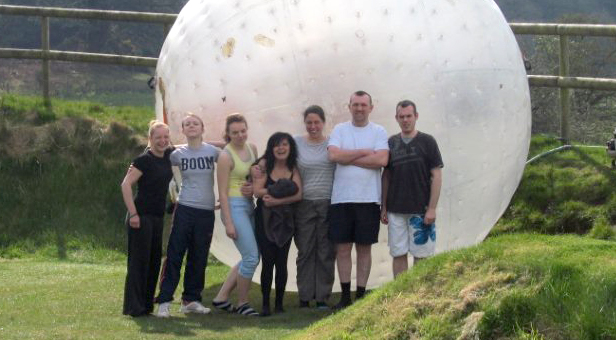 Over £700 was raised recently by staff at Punch and Judy Bakery in Bridport for Autism Wessex.

The adrenaline fuelled fundraiser involved the owners Sally and Steve Lawrence and five members of staff taking part in a Zorbing challenge supported by the local community who raised the impressive sum in sponsorship money for the charity.

Debbie Anderson, Fundraising and Marketing Manager comments; “We are really fortunate to have the support of the team at Punch and Judy. The team has supported Autism Wessex for six years and raised over £2,000 through various fundraising initiatives. It’s people like this that really do make a difference to charity’s like ours. So much of our income depends on funds raised through community donations and it enables us to continue to spend money where it is needed most to support those with autism and associated difficulties.”

Autism Wessex celebrates its 45th anniversary this year. The charity was started in 1968 by parents of children with autism, a little known condition 45 years ago and one which often saw medical professionals recommending institutions for children with autism. A lot has changed in 45 years and the charity has gone from strength to strength having rebranded earlier this year as Autism Wessex. While people with autism remain the focus of the charity’s work, this change aims to make the organisation more inclusive so that it responds to people’s needs rather than, necessarily, their particular diagnosis.

The charity’s anniversary Sapphire Ball is being held at The Queen’s Hotel in Bournemouth on 29 June. Tickets are available through the charity’s website www.autismwessex.org.uk for £55 each. A table of ten costs just £500.